Do you want to learn something new about bottlenose dolphins?

Great! Then let’s talk about what you don’t know about dolphins. When you’re done with this helpful guide, you’ll learn 5 interesting facts about bottlenose dolphins. Sound good? Then let’s jump in! 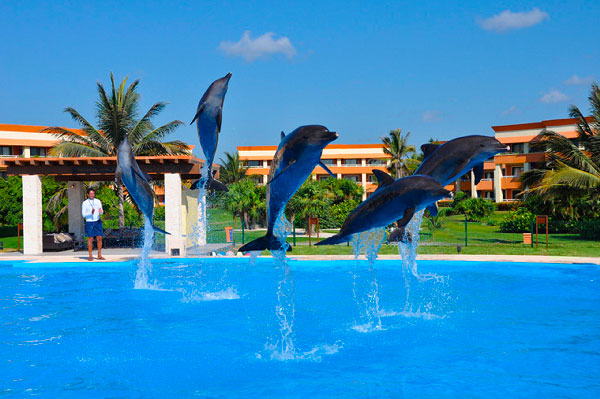 Did you know dolphins are the only mammal that gives birth, tail first? It’s not only bottlenose dolphins but all cetaceans. They do this to help prevent their calves from drowning.

It is possible that it happens head first, but that is rare.

Yes. It’s true. Dolphins don’t drink water. Sounds like complete nonsense right? Well, it’s not. Let me explain why. It’s actually common sense once you think of it. Dolphins, at least the majority, live in the saline waters of the ocean.

And as famous writer Samuel Taylor Coleridge once penned “Water, water, everywhere, but not a drop to drink.”

Of course, dolphins could drink salt water. But that would dehydrate them even more. So how do they do it? Do they have special filters in their mouths that remove salt as they drink it?

It’s much simpler than that. They receive hydration from their diet. In other words, when they’re eating, they’re also drinking. You see? I told you they didn’t drink their water. Pretty cool huh?

It’s hard to measure intelligence. Clearly, a dolphin won’t be able to take the same IQ tests as humans. So how do we compare the intelligence of multiple species? Some say the best way is the EQ method. EQ stands for encephalization quotient. That’s a fancy (and difficult to pronounce!) way of saying how big your brain is relative to your body.

The higher the number, the greater the intelligence.

Got it? Let’s try it out with a human. Humans have an EQ of 7.0. Now, alone, that means nothing right? So let’s compare with other intelligent species.

Whales, great apes, and elephants have an EQ of 1.8-2.3. Starting to get a better picture?

So where do dolphins fit on this scale? Dolphins have an EQ of 4.2! They have the greatest EQ score of species not named homo sapiens.

It’s interesting to note, that animals with high EQ scores tend to:

The takeaway? Help your neighbor! It’s not only the right thing to do. It’s the smart thing to do! 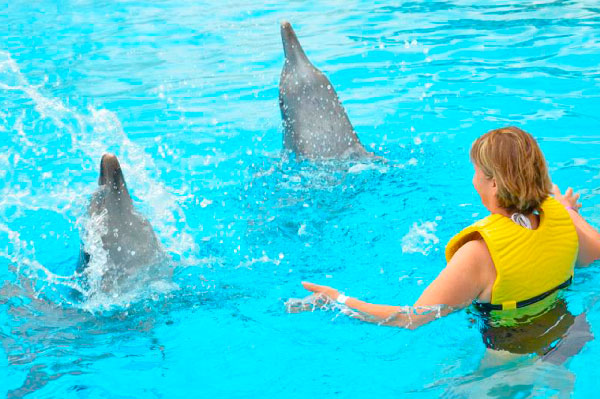 A new study revealed that dolphins can stay awake for multiple days at a time!

Dolphins sleep only half a brain at a time. This is called unihemispheric sleep. This allows them to rest, yet at the same time, monitor their environment for danger.

In the Amazon River, there exists an incredible creature: the boto, or Amazon River Dolphin. It is a freshwater dolphin that is pink! Some are only pink on their bellies, but others are pink everywhere.

They have whiskers around their mouths! It provides them with a sense of touch while they forage for food. 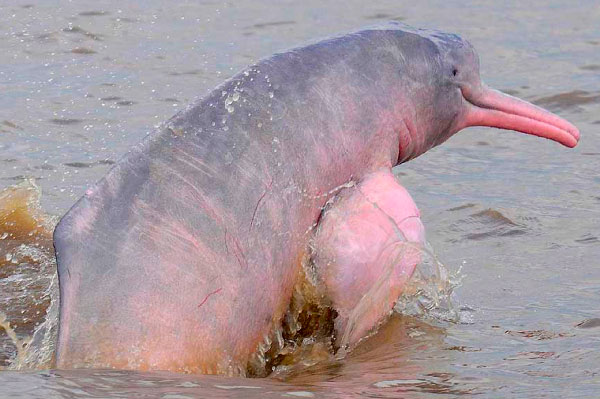 Dolphins lack any olfactory nerve (responsible for smelling) in their brains. Instead, they use their sense of taste.

Don’t feel too bad. They have echolocation, and we don’t!

For centuries there have been stories of sailors saved by dolphins. Only more recently have we confirmed this.

Just recently there was a surfer attacked by a shark. Who came to the rescue? No. Not the lifeguard. He was too busy checking out the girl in the bikini (we can presume, right?). It was actually a dolphin!

You have to remember something: Dolphins are not invincible to sharks. So that dolphin actually risked its life to save a different species.

If that doesn’t absolutely warm your heart, I don’t know what will.

There you have it, folks. That was 5 Interesting Facts About Bottlenose Dolphins. Fascinating stuff huh?

Did we miss any cool dolphin facts? Please do us a favor and remind us what we left out in the comments below. Thanks!