Types of dolphins and characteristics 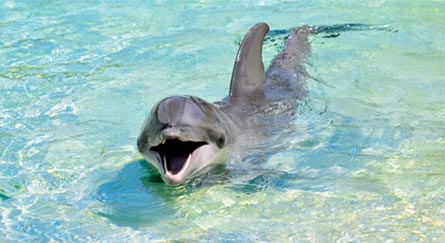 Types of dolphins and characteristics.

Dolphins are mammals that live in the water. They are some of the most intelligent creatures besides humans. There are about 43 species of dolphins that can be found in the world. Most of them are marine dolphins, though there a few species that can live just fine in freshwater. Apart from the well-known dolphin we all must have seen at some point in our lives, there are some others that are less common to find. Let’s take a look at some types and characteristics before you take a dolphin swim!

The bottlenose dolphin is the most well-known specie of all. Their name comes, obviously, from the shape of their nose that resembles a bottle and makes them attractive because they seem to be always smiling. They are commonly found near humans because this specie is very sociable and friendly to humans. Their social behavior is very similar to the way humans behave. They live in warmer waters around the world, preferring tropical environments. If you want to get in touch with dolphins, learn from them and have fun at the same time, you will be happy to know that you can have a close experience swimming with dolphins at dolphinariums. Bottlenose dolphins are commonly found there! And there are different options of dolphin swim programs and activities that will let you know a little bit more about these adorable friends and how they behave.

The common dolphin species can be found in shallow waters and very near to the coast. That is why people have been in contact with them since ancient times. For example, they appear in ancient roman and greek works of art and literature. And that is also a reason why people often mistake the common dolphin with the bottlenose dolphin. The difference is that the common dolphin presents a bright and interesting color on its skin. Sometimes they have patterns with dark gray capes on their fins too.

The Atlantic spotted dolphin is a very long species of dolphin that is known for developing unique spots over their bodies as they get older. That also serves as identification for their age; people can know if they have reached maturity by looking at the spots on them (young dolphins don’t have spots). These dolphins’ behavior is particular. They are excellent at communication, using some loud clicks and whistles in order to talk to each other. They form big groups known as ‘pods’ and are able to coexist and move with other dolphin species without any conflicts.

One of the best ways of getting closer with dolphins and learn more facts and characteristics is by swimming with them. At dolphinariums in Riviera Maya, you will be provided with a complete experience and many options and different dolphin swim programs. Also, you will find modern facilities and locations so you have a safe experience only worrying about having the fun and best experience.